Do you also have some- thing that needs to be containerised? 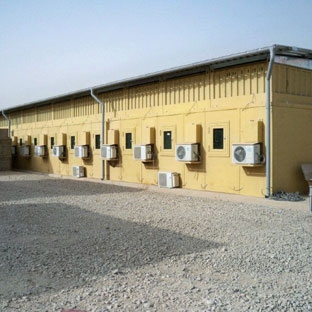 A camp with 32 containers and adaptive container protection

New system for the protection of task forces

To aid the Afghan central government with the reconstruction of its country Ð that is the task of the Provincial Reconstruction Teams that form part of the ISAF Afghanistan. Conditions in the field are particularly problematic at the PRT Camp in Kunduz, where the German contingent predominates, as the security situation is critical: attacks by insurgents represent a constant threat. In order to improve the safety of the 1400 service personnel and civilians (including police officers) stationed there, the Bundeswehr commissioned FHF GmbH, a company based in Bremen, to install a new adaptable armoured protection system in parts of the container camp.

This modular armour concept takes the form of a flexible system that can be subsequently mounted on containers to protect these against rocket and mortar attack; it conforms to the requirements of class C4 of NATO STANAG 2280. The system consists of sturdy, multilayer steel components for the protection of the sides and ends of a container and a half-height container with integrated armour for mounting on the roof. When used in combination, the components are compatible with all 20-foot ISO standard containers and also take into account the block building layout employed in military camps. It can also be used to protect mobile medical containers, such as those used for field hospitals and operating theatres. If the protective armour system is damaged, only this needs to be replaced – any container it is mounted on will remain fully operational. FHF had already begun to collaborate closely with the Bundeswehr while developing the system, and the Bundeswehr has since fully certified the system after conducting appropriate testing. Testing involved exposing the protective armour to simulated shelling and it was demonstrated that the system effectively prevented damage to protected containers.

The new armour system has initially been installed on four blocks, each consisting of 28 accommodation units and medical containers, in PRT Camp Kunduz. Components for the protection of two further of 32 containers each are currently on their way to Kunduz. During transport, all the required components were packed in the half-height containers, which thus serve as the medium for conveyance of the system and subsequently as the elements for the protection of roofs in the camp. During loading, two half-height containers can be assembled to form a 20-foot standard container, so that the system, with its CSC certification, is authorised for use for container transport without restriction – making it possible to ship the system cost-effectively and rapidly anywhere in the world. Unfortunately, the first shipment of the systemsent to Kunduz ran into difficulties: one of the HGVs was attacked, caught fire and was destroyed. The container protection module loaded on it remained intact; only the outer covering was damaged by fire but it proved possible to repair this and subsequently employ it as originally planned.

On-site installation in the camp

The installation procedure in Kunduz had been planned in advance by the Logistics Office (Logistikamt) of the Bundeswehr and FHF GmbH. The FHF specialists onsite worked as part of a closely knit team with the camp personnel. A mobile crane was used to manoeuvre the steel components into position where they could then be fixed in place. While developing the system, FHF had taken into account the standard international practice of organising containers in camps in blocks. This meant that only the container walls in the outer zones required protection, together with the container roofs. This system has the capacity to be installed to protect containers that are already in use, as it was the case in Kunduz.

More safety and comfort – initial reactions to the new system

All reactions during the first weeks following installation of the adaptable container protection system in the PRT camp were positive. In the past, all camp residents had had to retire to the protective shelter whenever alarm was sounded but now at least those in the armoured containers can remain where they are. This represents a considerable respite for them, particularly at night, and enhanced safety, a factor not to be underrated particularly in view of the dif cult conditions under which the residents have to live and work. The comfort of the camp’s inhabitants has also been improved: the 2.5 metre-wide corridor area protected by the roof system is used by service and civilian personnel for briefings and as a rest and recreation zone during the day.

One positive side effect of the system became apparent in Kunduz shortly after its installation: the layers of air between the external walls of containers and the protective armour provide additional insulation, thus protecting the internal rooms against the extremes of heat and cold. As a result, it has been possible to reduce the consumption of energy that was previously required to operate air conditioning and heating systems.

» The system» Transport and logistics
» Joint project development with the Bundeswehr